The eastern and northern paved forecourts of Fisher Library contain two individual specimens, a Moreton Bay Fig (Ficus macrophylla) (Eastern Avenue forecourt) and a multi-trunk Port Jackson Fig (Ficus rubiginosa f. rubiginosa) (northern forecourt). Both trees are of substantial scale and impact on the quality of these spaces. The Port Jackson Fig is a particularly large example of this species (25 metres canopy spread). The Moreton Bay Fig is of a similar size (26 metres canopy spread) and age structure. Both trees would date from the earliest stages of development during the latter part of the nineteenth century.

The formal avenue planting of Port Jackson Figs (Ficus rubiginosa f. rubiginosa and f. glabrescens) beside University Avenue is one of the great formal, single species avenues in the City of Sydney. Although these native figs are relatively small in stature (averaging 10-12 metres in height/ 10-12 metres in canopy diameter), they make a memorable contribution to the formal, structured character of this entry precinct to the University. These trees reinforce the axial geometry and define the major pedestrian linkage between Victoria Park and the Main University Building. These trees are prominent visual elements, directing and controlling the line of view and framing distant vistas of the City sky-line over Victoria Park (refer to Victoria Park listing in this Register).

A large American Cottonwood (Populus deltoides) is located immediately south of the The Quadrangle.

The grounds of the University of Sydney contain an exceptional collection of significant trees, many of which are important elements in association with heritage listed buildings and road precincts. A number of places and items are scheduled on the Register of the National Estate, the State Heritage Register, City of Sydney Local Environmental Plan 2012 and classified by the National Trust of Australia (NSW). At a group level, the significant trees within the University are considered to be one of the City of Sydney’s more important collections in terms of the special combination of aesthetic, scientific, botanic, historic, social and commemorative values.

Many of these trees are of exceptional value, creating landscapes of high visual and aesthetic quality and a unique sense of place. The University’s significant trees are typically associated with the curtilage of historic buildings, building facades, boundaries to colleges and along the campus boundaries, ovals and sportsgrounds, internal roadways and pedestrian walkways, courtyards and a broad range of ancillary spaces. These trees tell the stories and aspirations of people. They also provide historic markers in the landscape, describing the way the campus developed over time and its close links with Royal Prince Alfred Hospital and Victoria Park (refer to other listings in this Register).

A large part of the collection dates from the mid- to late nineteenth century and reflects the eclectic thematic planting styles and various overlays of the period, particularly the influence of Charles Moore (Director, Royal Botanic Gardens 1848-1896) and the Macleay family. These nineteenth century landscapes contained strong structural elements. These trees have created a distinctive sense of place and continue to provide a rich legacy for the current and future generations of Sydney. They included consistent thematic planting palettes, row planting to boundaries, as well as informal clusters and groupings which combined to provide overall consistency, connectivity and integrity. During the Inter-War period (c. 1915-1940), Professor Leslie Wilkinson and Professor E.G. Waterhouse further influenced the landscape character of the University and introduced new elements which have now matured to become significant trees within this context.

The Main Building and Quadrangle Group, including the Great Hall, Quadrangle and various sympathetic and complementary additions are listed on the Register of the National Estate, the State Heritage Register, City of Sydney Local Environmental Plan 2012 and classified by the National Trust of Australia (NSW). The original building, designed by Edmund Blackett in the Gothic Revival style, was completed in 1860. It was Australia’s first university building. Following later additions, the complex of buildings enclosed a traditional English collegiate grassed quadrangle. In 1928, Professor E.G. Waterhouse planted a Jacaranda (Jacaranda mimosifolia) in the south-eastern corner of the Quadrangle lawn. Following a number of failed attempts to establish saplings (its removal being the subject of student pranks), a semi-mature specimen was finally established. This tree, now standing 12 metres high with a canopy spread of 18 metres, remains one of Sydney’s best known significant trees (SMH, 18 Nov. 2000). For students, its stunning flower display in November marks an end to the University calendar and beckons the summer holidays.

The formal avenue planting of Port Jackson Figs (Ficus rubiginosa f. rubiginosa and f. glabrescens) beside University Avenue is vsible in 1860 and 1880 photos. The Moreton Bay Fig (Ficus macrophylla) (Eastern Avenue forecourt) is clearly visible as well established trees in 1943 aerial photos of the campus and would probably indicate planting in a similar period. 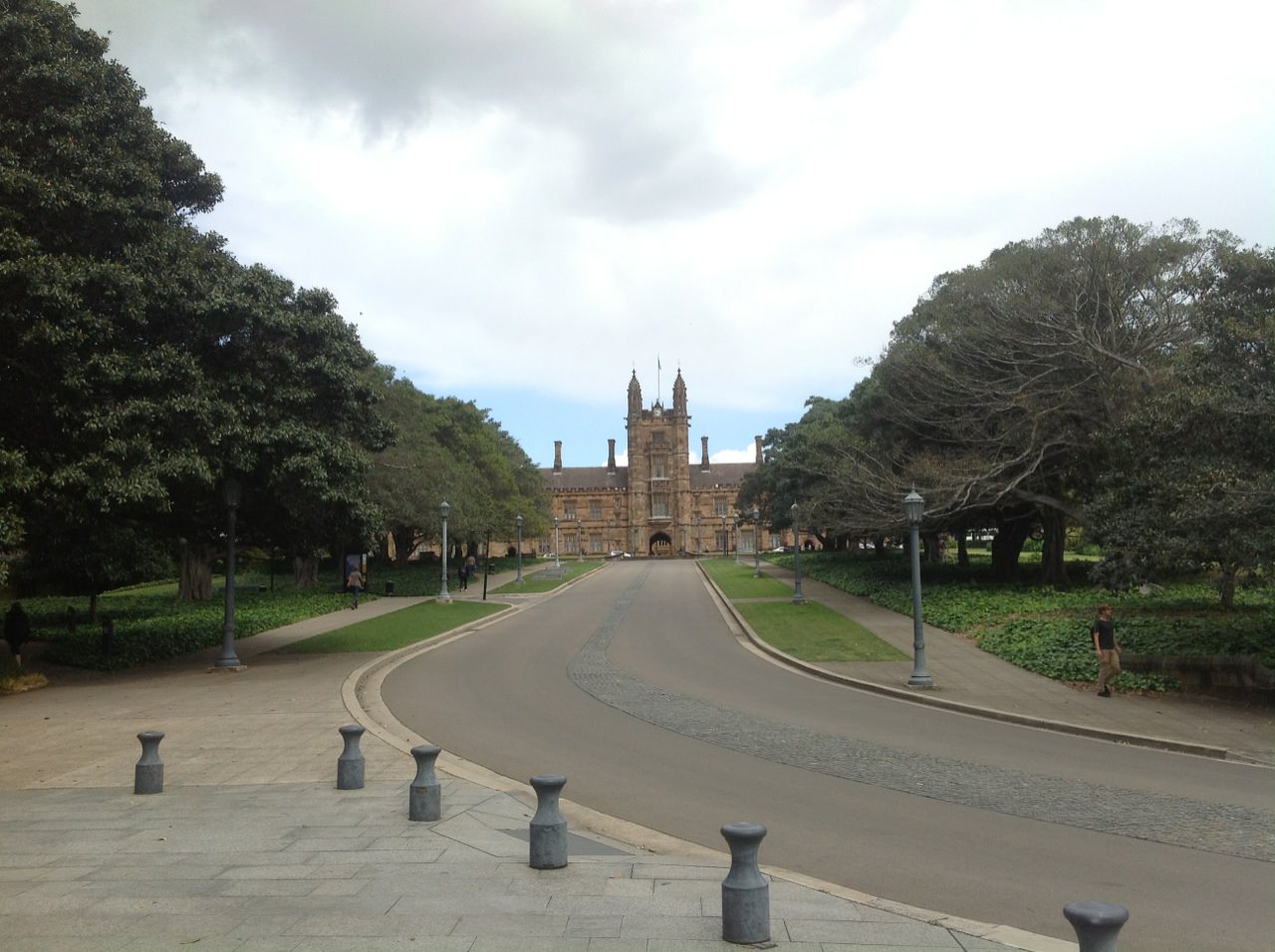 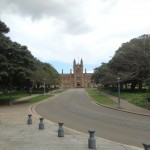 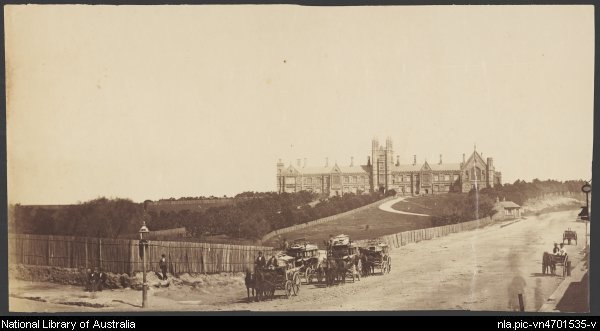 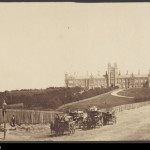 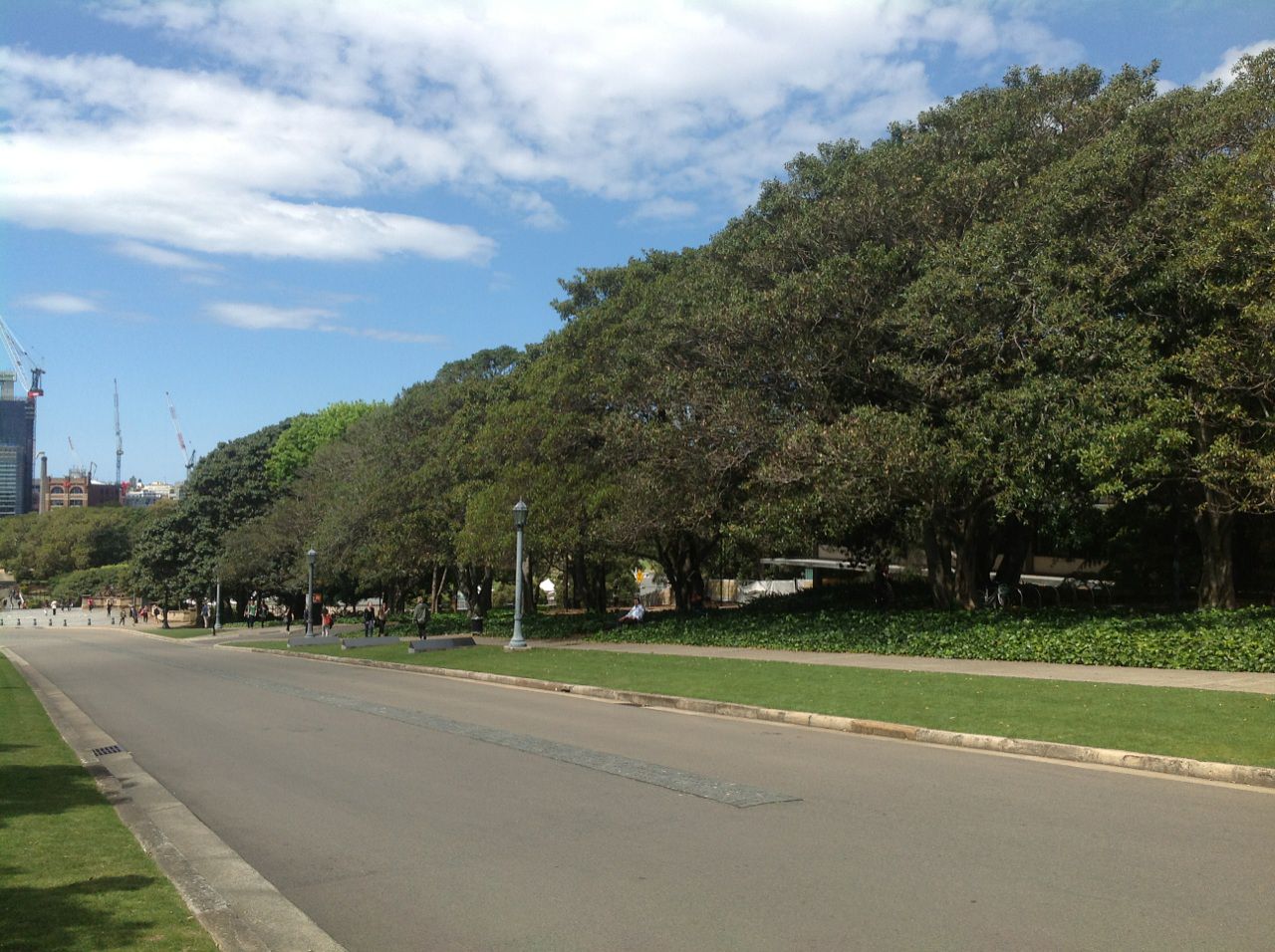 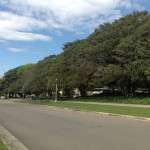 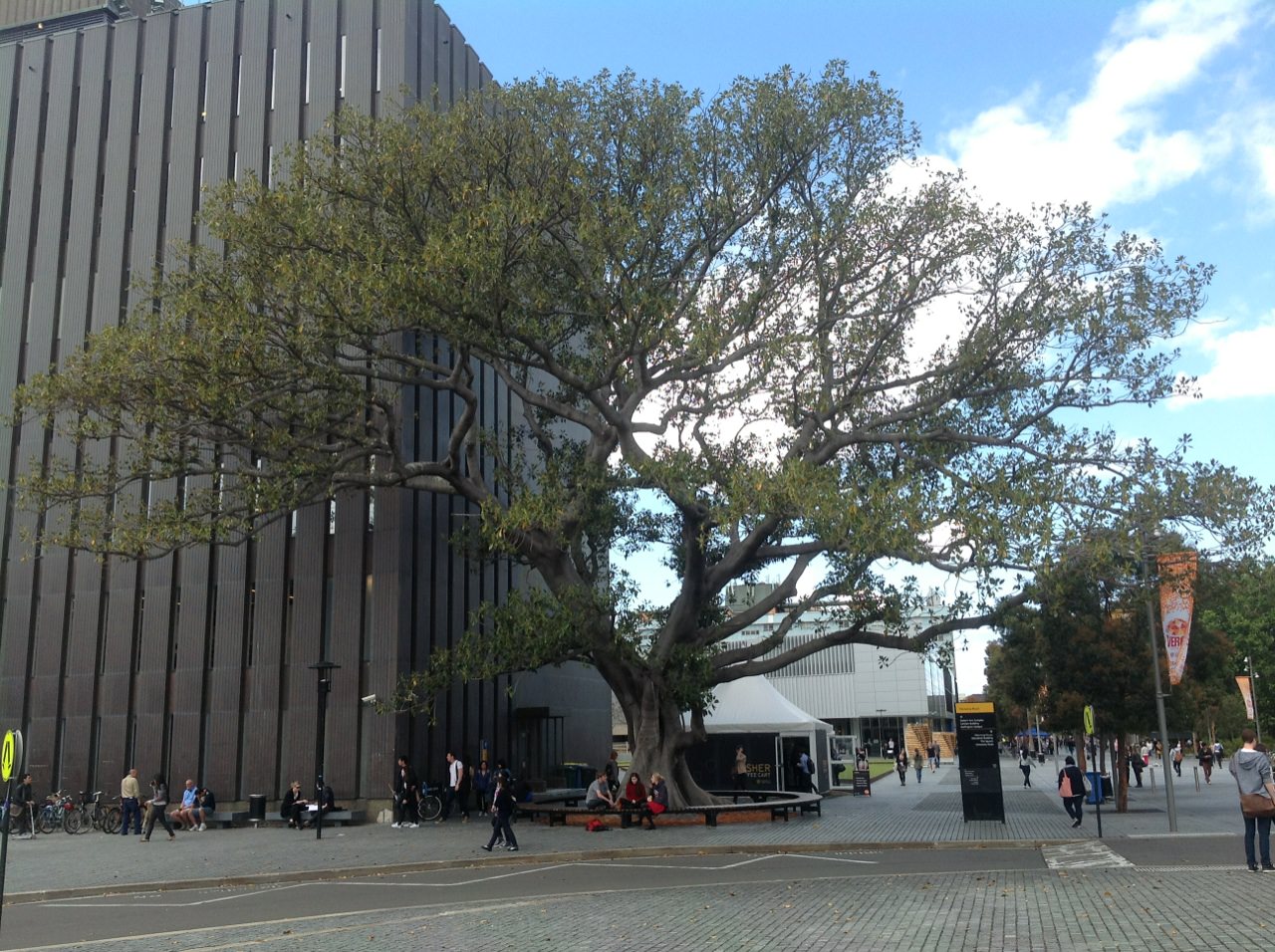 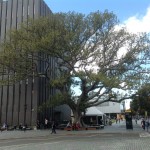 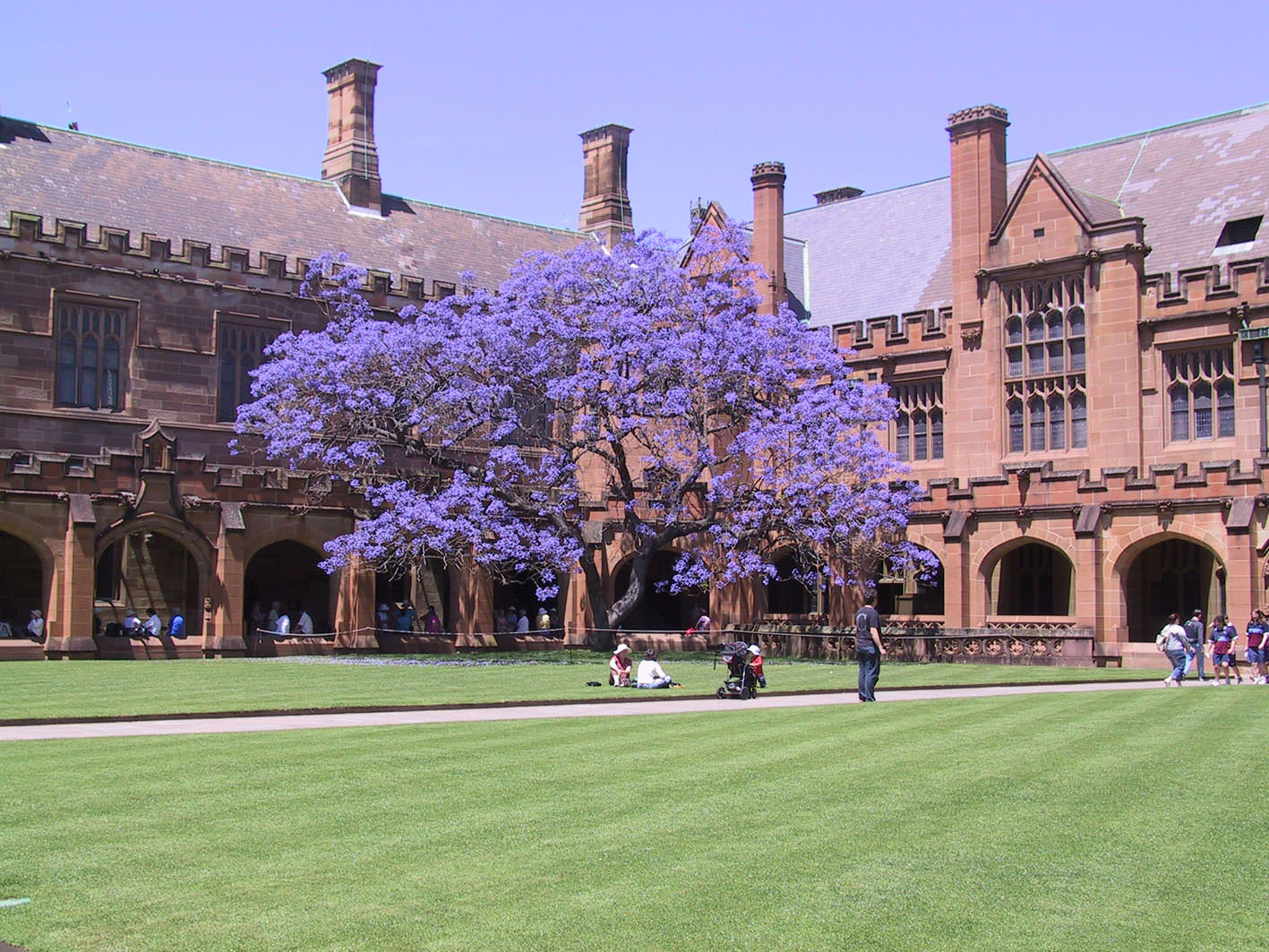 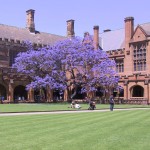 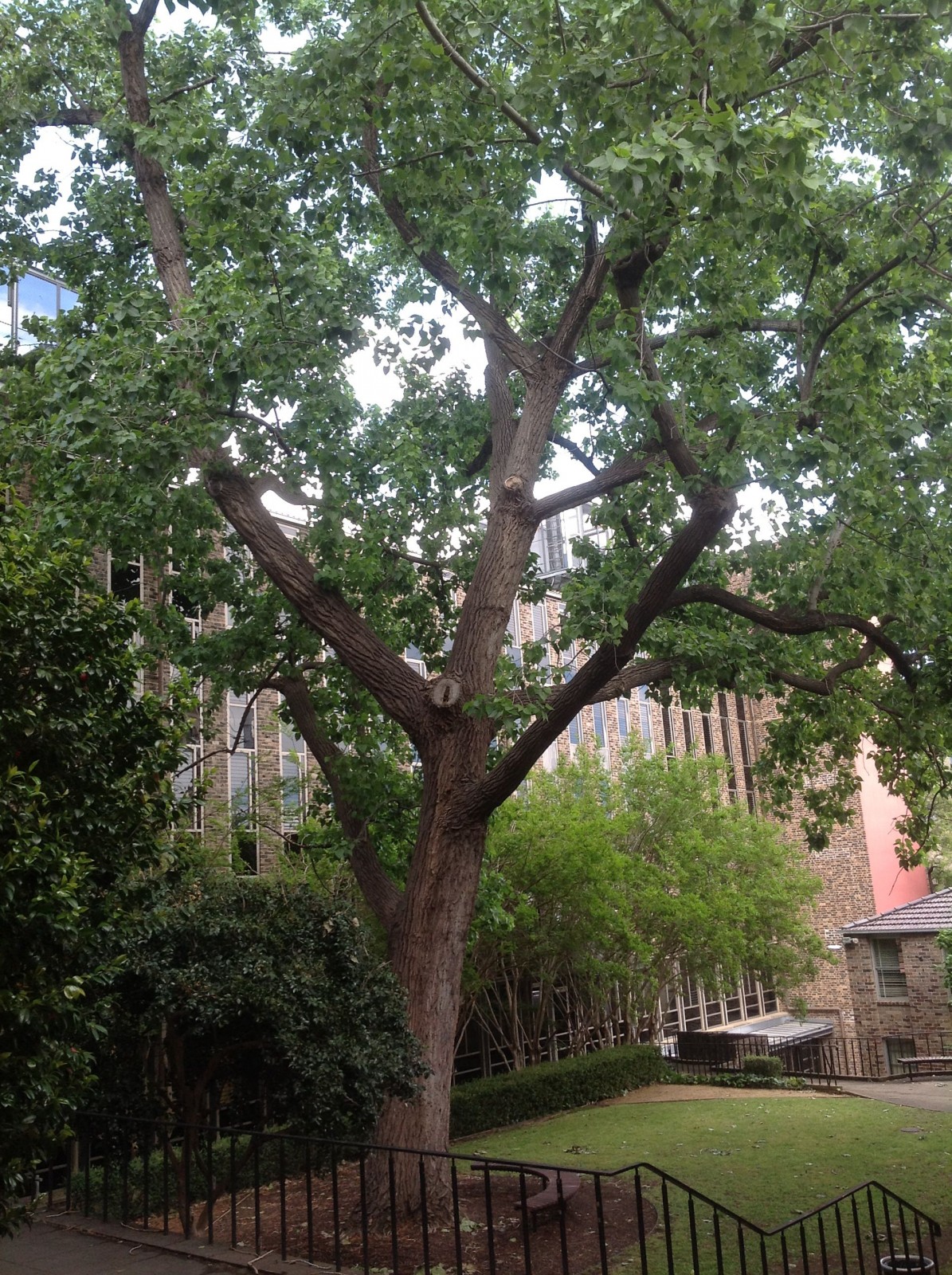 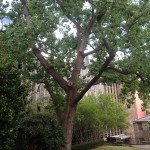 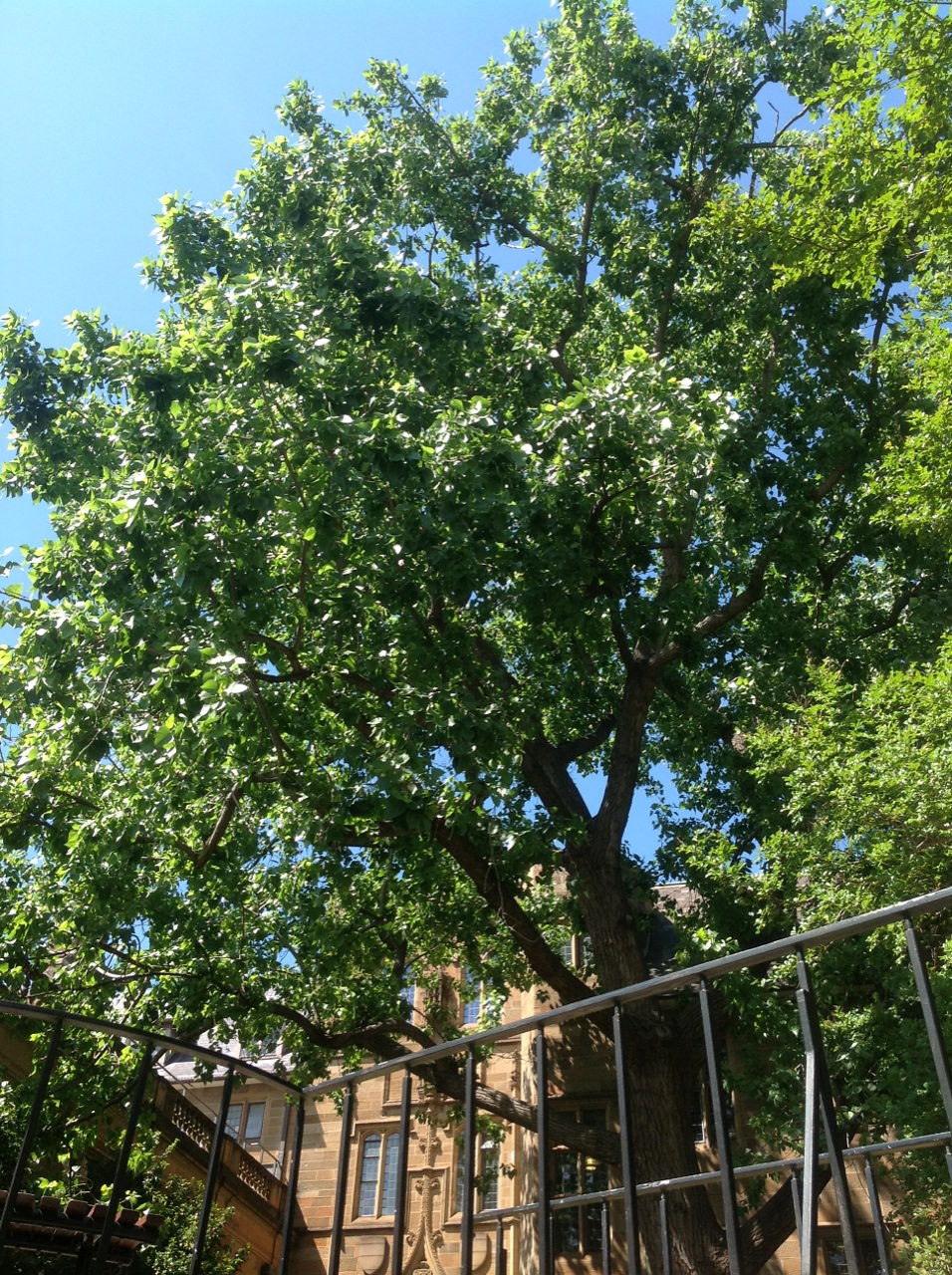 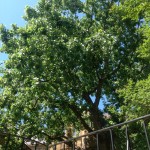 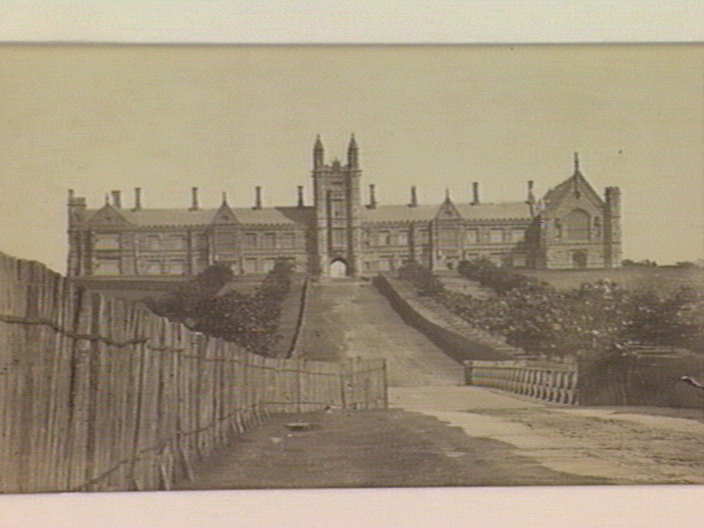 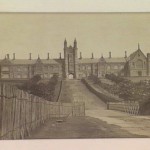