Of particular note, is the occurrence of some relatively uncommon native fig species in this row plantation. These include four specimens of the Small-leaved Fig (Ficus obliqua) and two Deciduous Fig (Ficus superba var. henneana). Both species occur sporadically across the LGA as minor components within broader fig planting schemes dating from this late-Victorian period. One of the Small-leaved Figs has achieved unusually large proportions for this taxon, particularly within this context. Generally, Moreton Bay Figs are much larger and they tend to suppress this species in the row plantations. The specimens of Small-leaved Fig are approximately 18 metres in height, 24 metres canopy spread and 1.3m diameter base – larger than any of the Moreton Bay Figs in this group.

The scheduled items in this group do not include those already covered in other listing such as Moore Park Golf Course, Sydney Boys High School and Cleveland Street and Cleveland Street, some of which also contribute to this streetscape and historic landscape precinct.

The mixed fig avenue along Anzac Parade present an extremely historic and culturally significant group of trees dating from the late-Victorian period. Collectively, these figs have group significance at the City/ LGA level in terms of their aesthetic, historic, commemorative and social values. It represents one of the most iconic and significant avenue plantings in the Sydney metropolitan area.

Centennial Parklands, covering an area of more than 360 hectares, is comprised of three major parks – Centennial Park, Moore Park and Queens Park. In 1811, 1000 acres of land was set aside by Governor Lachlan Macquarie as the Second Sydney Common, an area which included the Lachlan Swamps (later linked via Busby’s Bore to provide Sydney’s water supply 1837-1886). In 1866, an area of 378 acres [approx. 149 hectares] of the Sydney Common was dedicated by Sydney City Council as parkland for public recreation to address the needs of a growing population. It was named Moore Park after Charles Moore, Mayor of Sydney (1867-1869) and Director of the Sydney Botanic Gardens (1848-1896). In 1888, Sir Henry Parkes officially opened Centennial Park which marked the centenary of the arrival of the First Fleet at Sydney Cove on 26th January 1788. Centennial Park was again the focus for celebrations on 1st January 1901 for the proclamation of the Commonwealth of Australia (inauguration of Federation) and the uniting of the six Australian colonies.

During the latter part of the nineteenth century, Moore Park continued to grow in importance as a focus for public recreation, entertainment and major sporting events. The first known polo game in Australia was played at Moore Park in 1874. In 1879, an initial land grant was established for the development of Moore Park Zoological Gardens, which were opened in 1884 (refer to Sydney Boys High School & Sydney Girls High School listing in this Register). The Royal Agricultural Society (RAS) Showground opened in 1882 and expanded into part of the Rifle Range in 1886. A nine-hole golf course known as the Moore Park Municipal Golf Links opened in 1913. This was later expanded to include 18-holes in 1922 and become the Moore Park Golf Course. The development of a broad range of recreational and entertainment facilities has continued up to the present day.

The Moore Park precinct now includes Moore Park, Moore Park Public Golf Course and Driving Range, ES Marks Athletics Field, Centennial Parklands Equestrian Centre, Fox Studios Australia (former RAS showground site – on lease from the Trust), Aussie Stadium and Sydney Cricket Ground. This area contains an outstanding collection of significant trees. These trees are important historic and cultural landscape elements defining the public spaces – the parkland, pedestrian pathways, heritage listed buildings and road precincts. At a group level, the precinct’s significant trees are considered to be one of the City of Sydney’s most important collections in terms of the special combination of aesthetic, visual, scientific, botanic, cultural, historic, social and commemorative values. Within this group level, there are the dominant row plantations as well as a range of smaller clusters and groupings. Within these groups, there are a large number of individual specimens believed to have significance at both the local and broader City of Sydney LGA levels.

Charles Moore’s vision for these parklands, the streetscapes and public recreational spaces together with the work of Joseph Maiden (Director, Sydney Botanic Gardens 1896-1924), James Jones (Head Gardener/ Overseer 1887-89) and William Forsyth have created a lasting legacy for the people of Sydney. The Victorian period public planting schemes have matured to produce landscapes which are dominated by massive native figs, particularly the Moreton Bay Fig (Ficus macrophylla) and Port Jackson Fig (F. rubiginosa). These species have been used predominantly in row plantations along the boundaries to the parkland. Essentially, the large, broadly spreading, evergreen figs remained the tree of choice in these schemes – the quintessential elements in these boundary plantations. This approach can be seen throughout Moore Park and particularly along Anzac Parade.

The figs along this portion of Anzac Parade date from c.1868 when Botany Road, renamed Randwick Road, and now known as Anzac Parade was planted. It was originally planted with a double row of Norfolk island Pines with an outer row of alternating Moreton Bay Figs and Monterey Pines. In 1917 the road was widened and the failed Monterey Pines were replaced with Port Jackson Figs. After WWI the road was named Anzac Parade, as Sydney’s most important boulevarde, to commemorate the Anzac troops (Centennial Parkland CMP 2001). 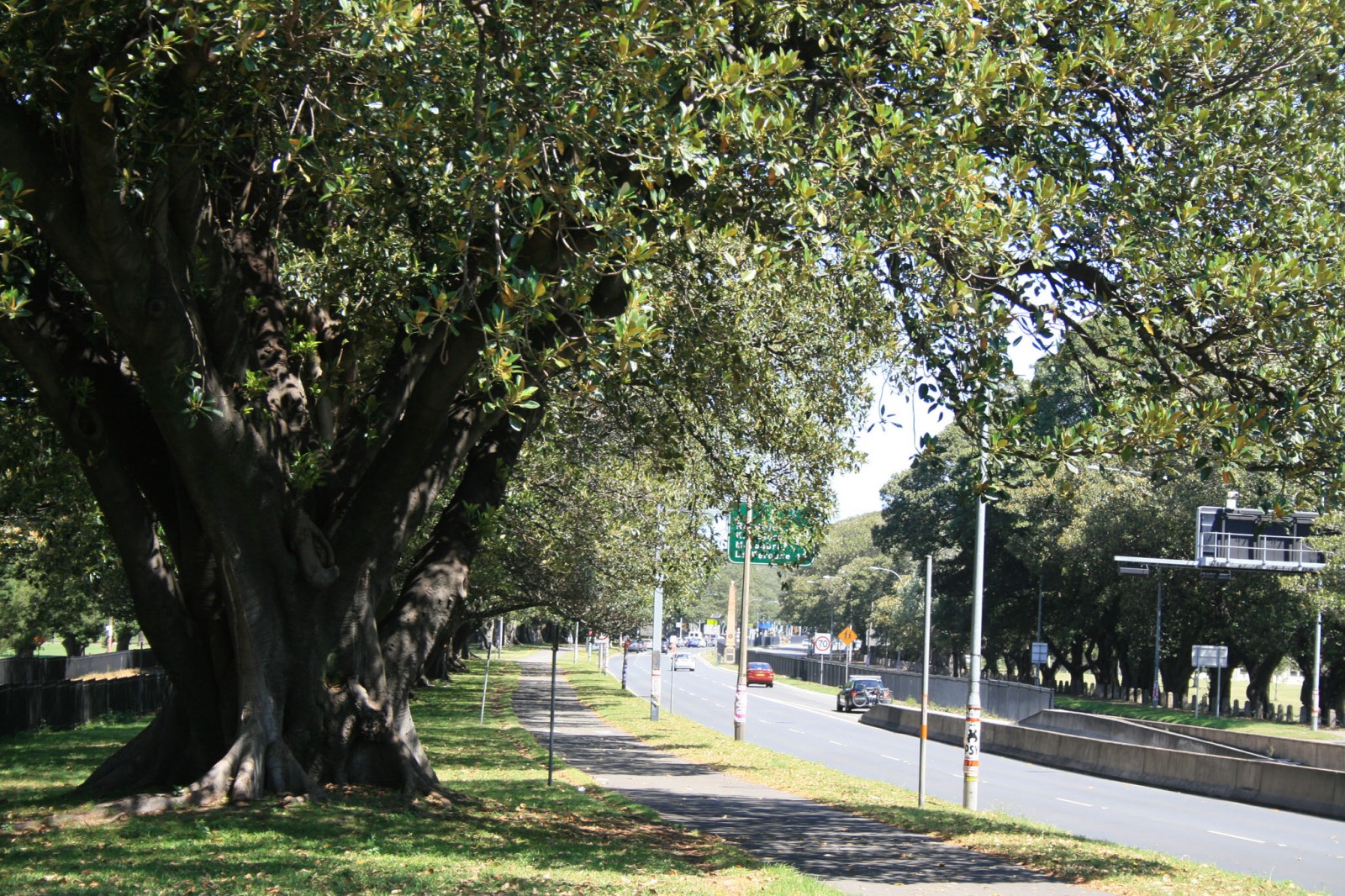 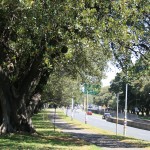 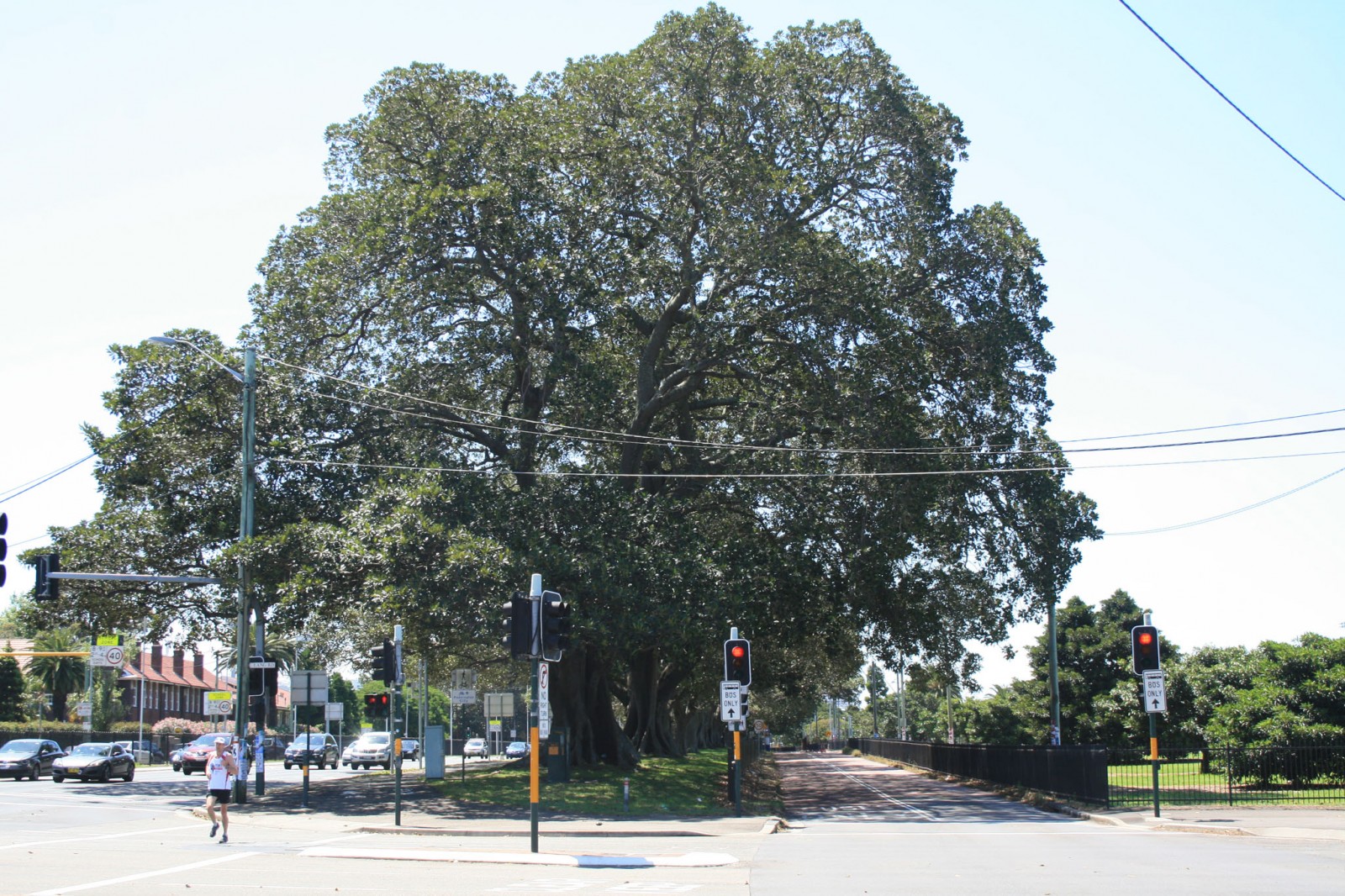 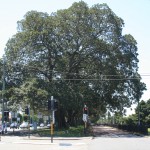 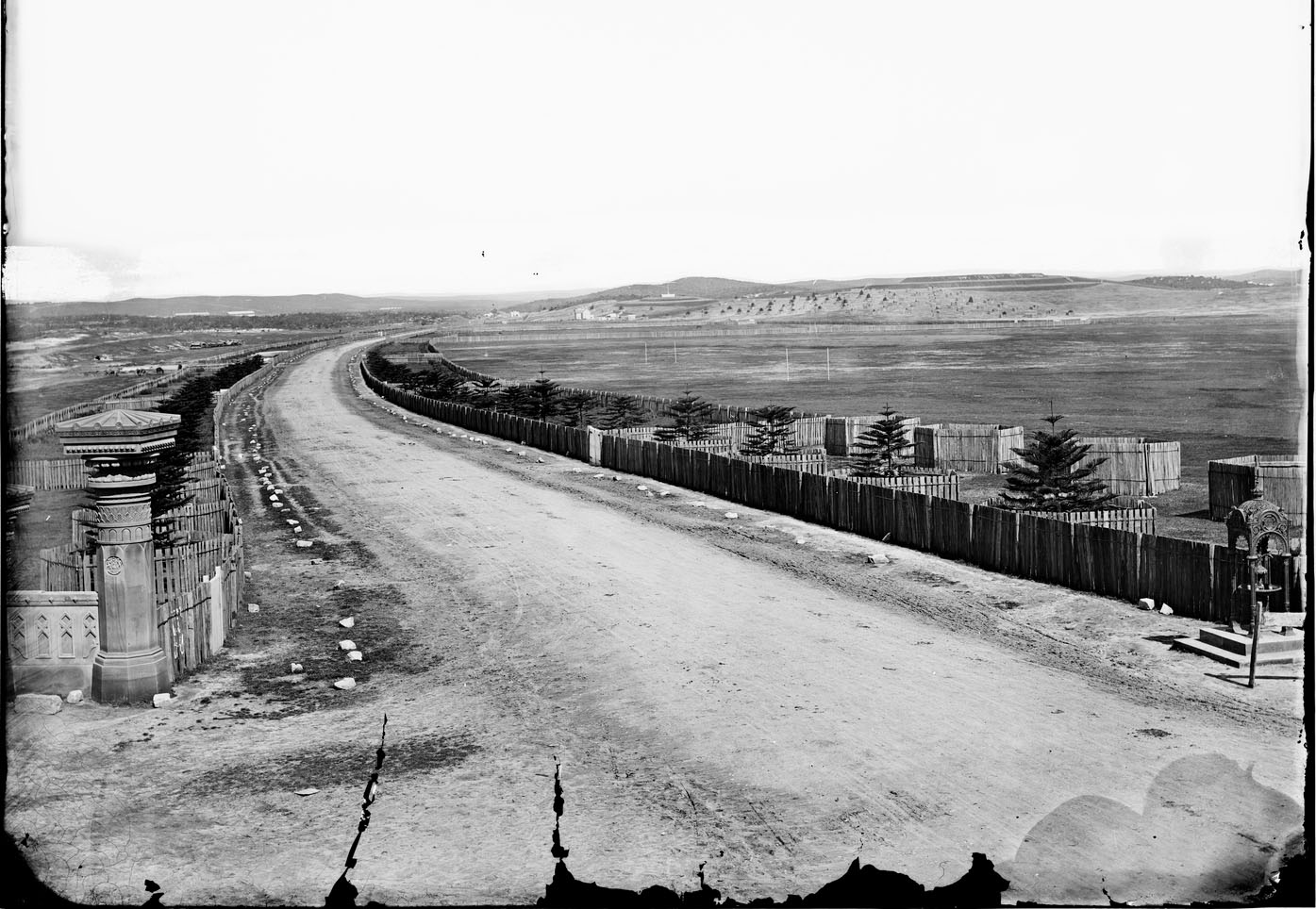 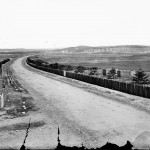 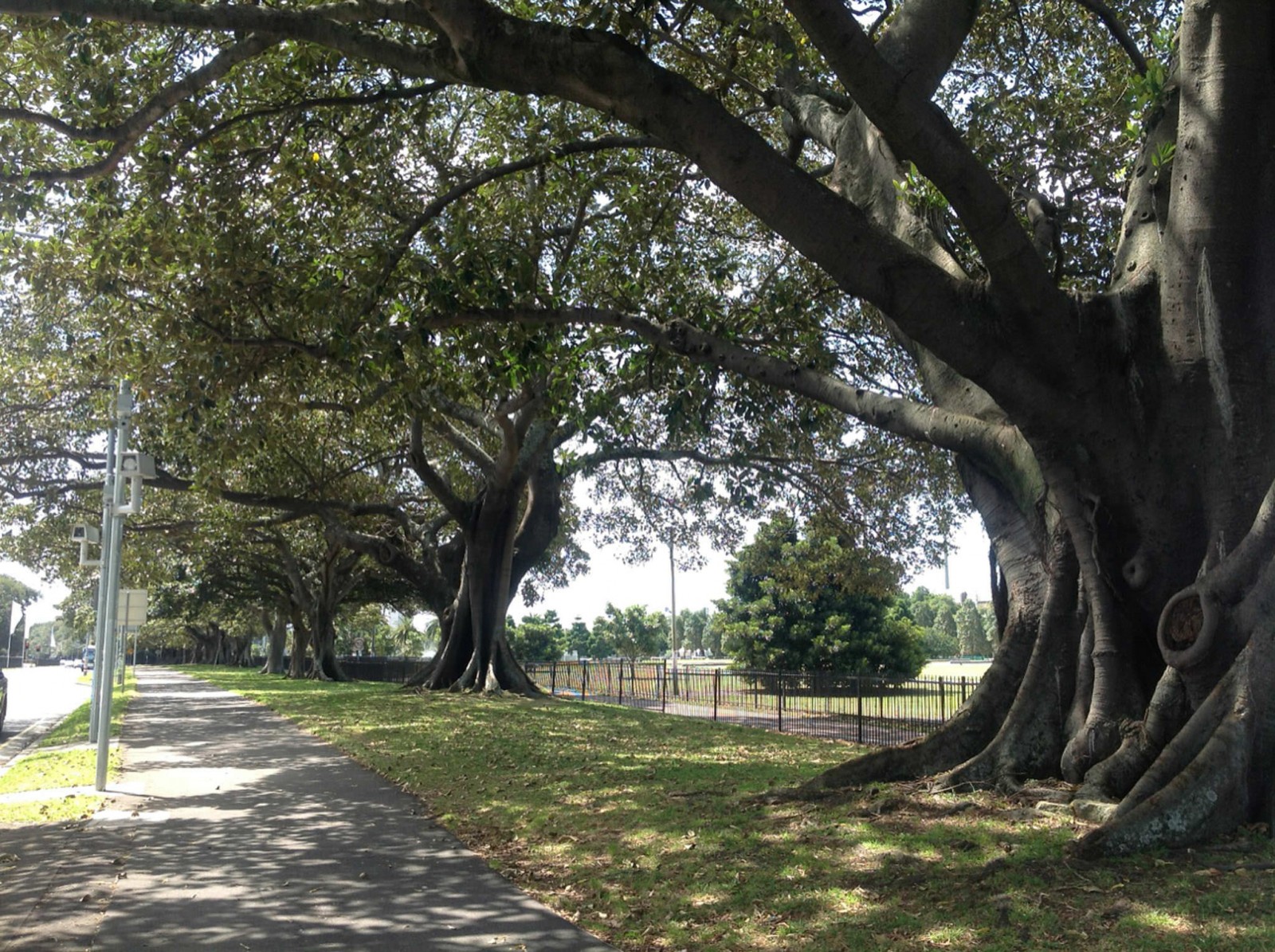 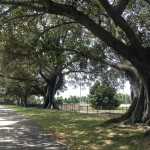 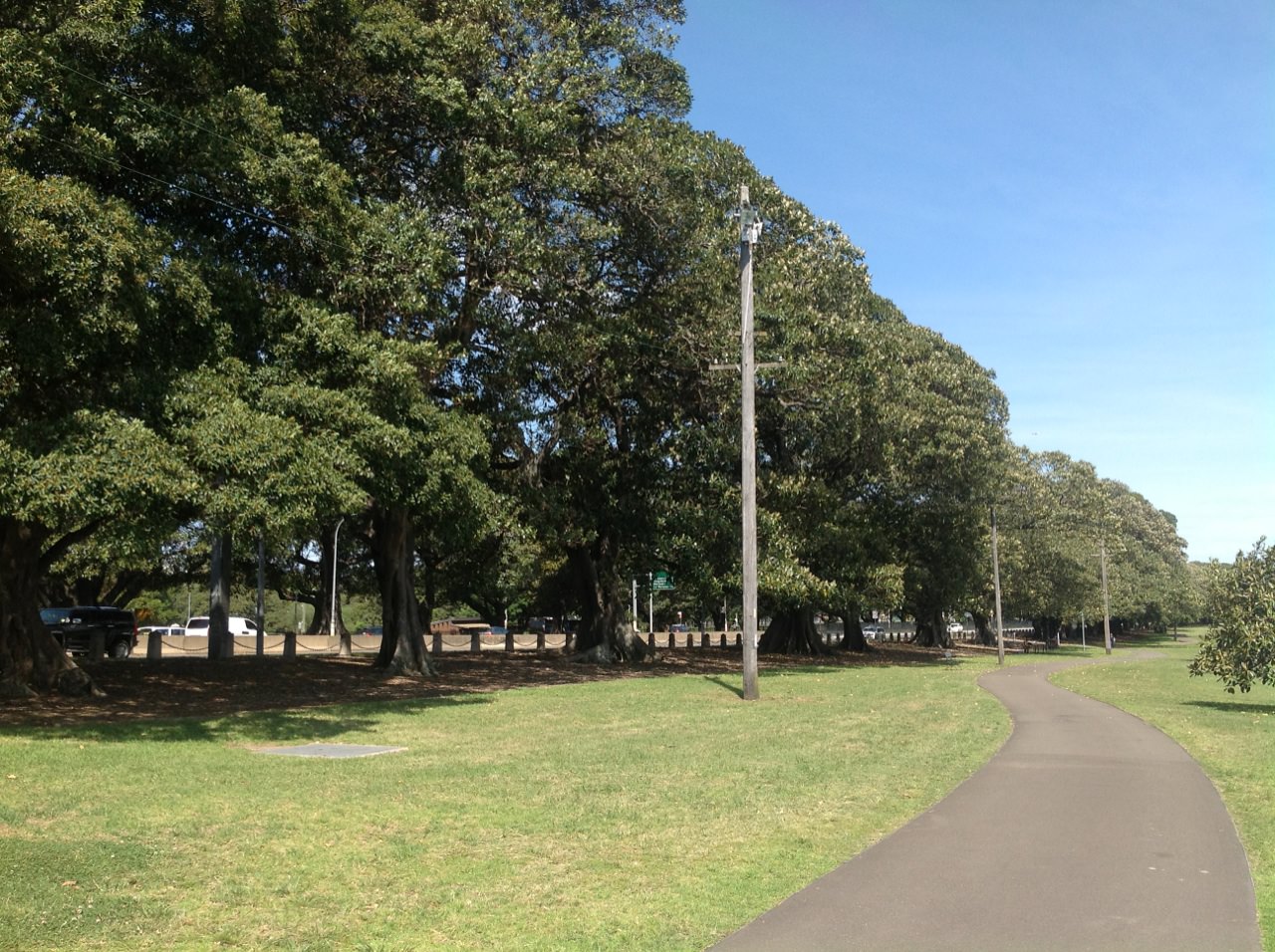 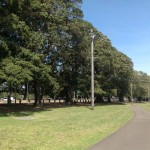 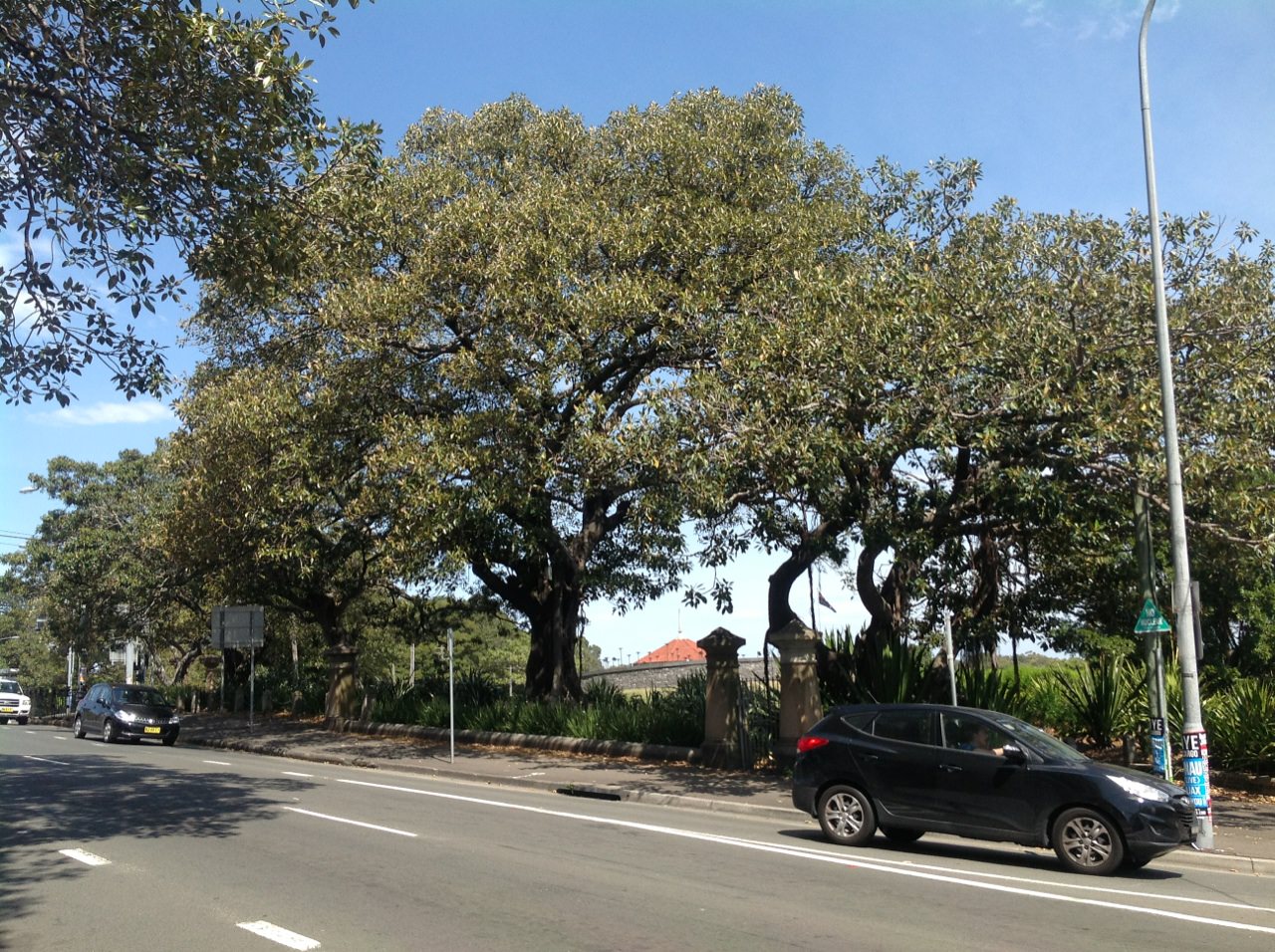 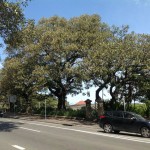 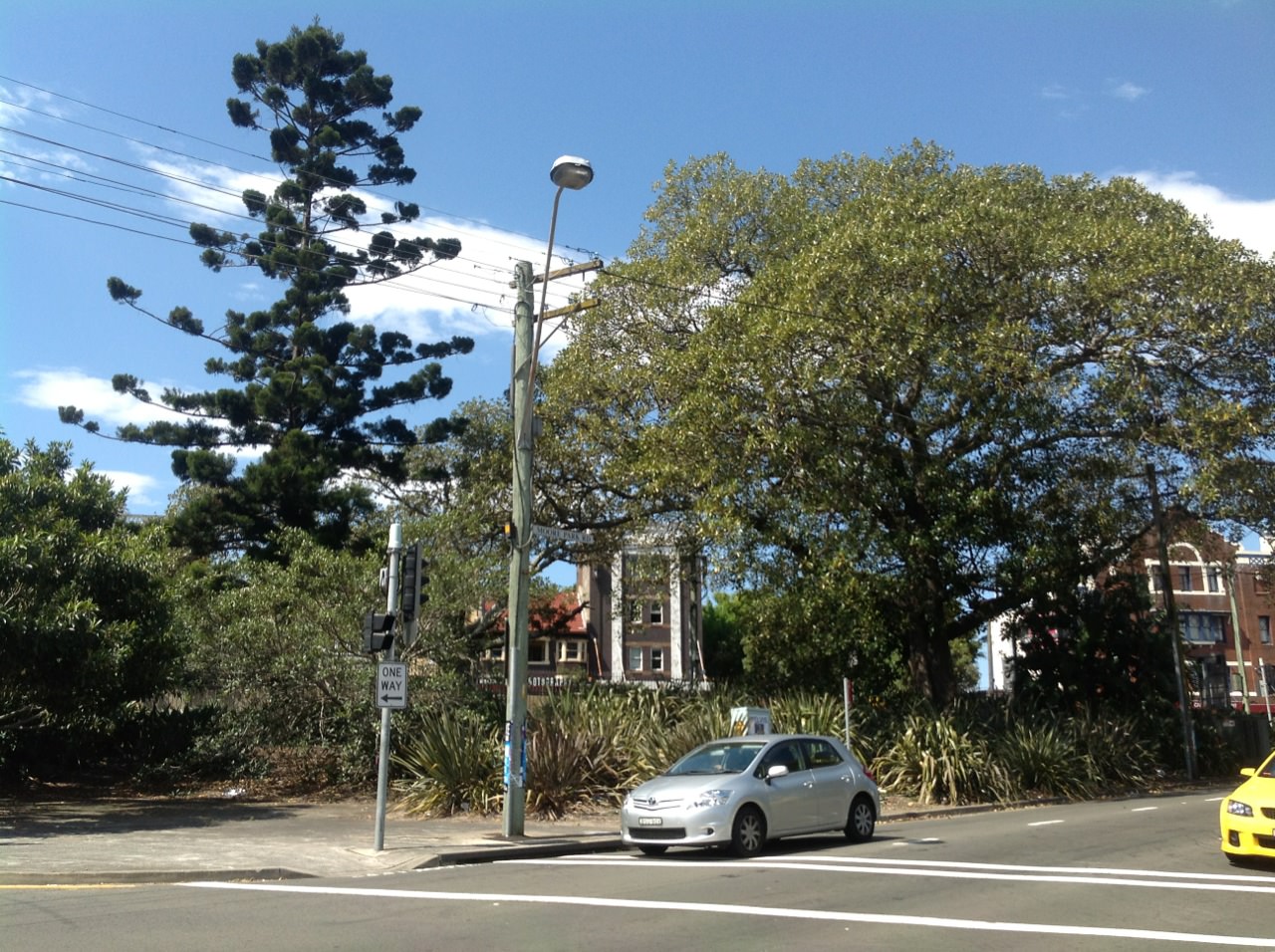 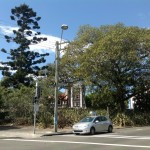 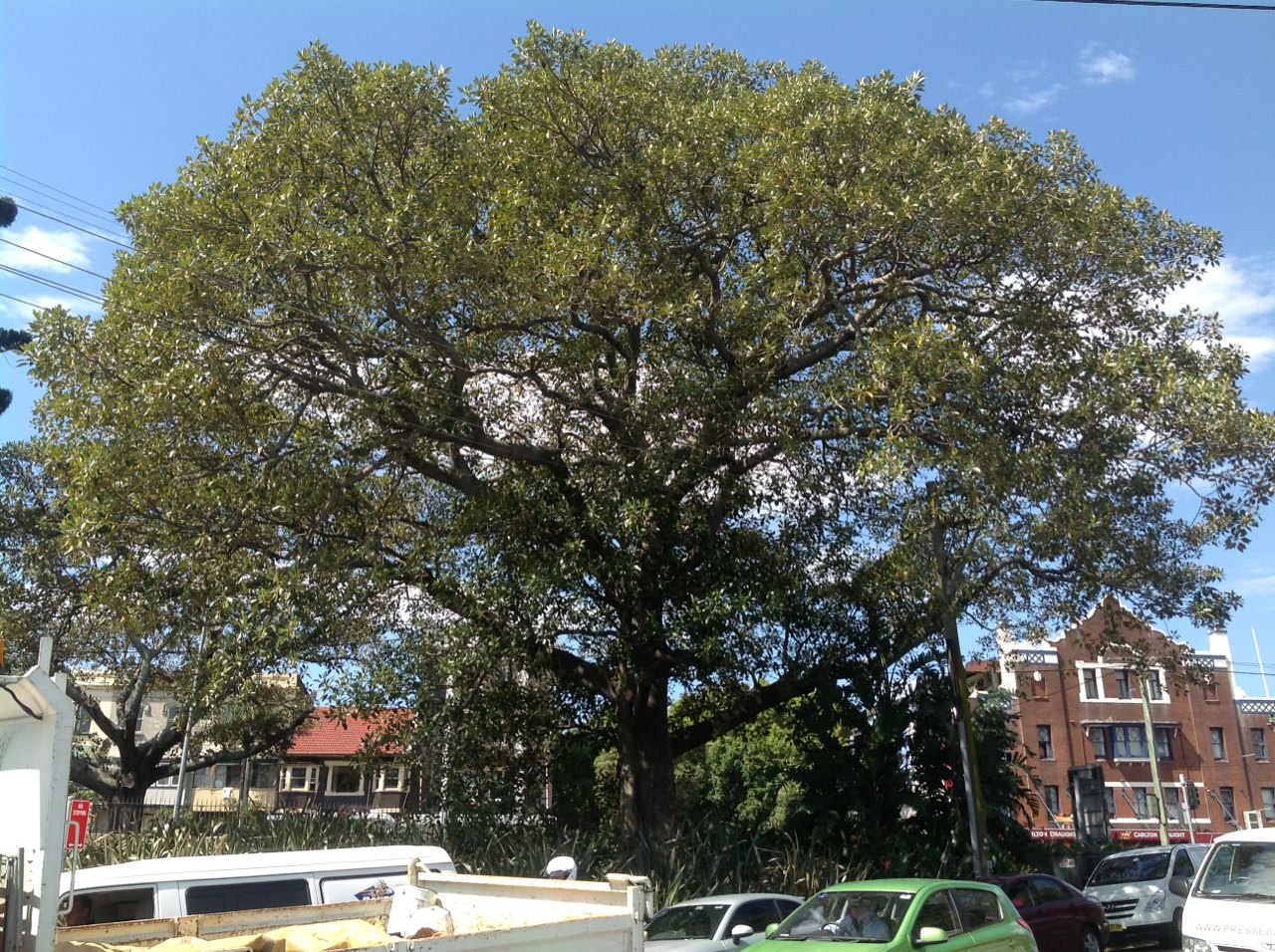 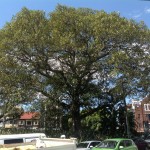 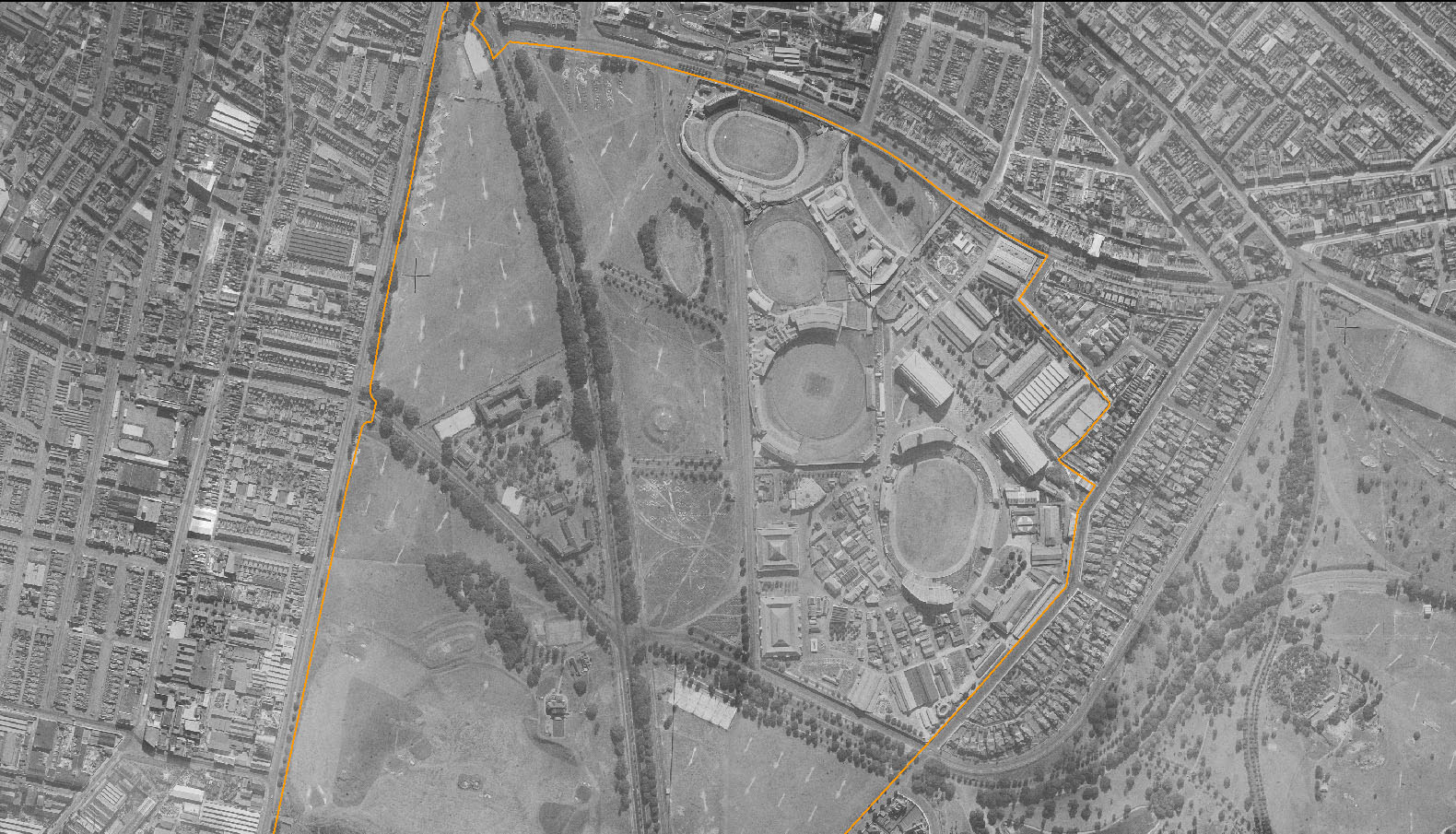 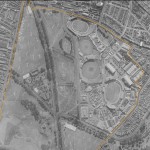